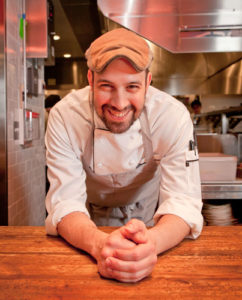 Louis DiBiccari is a chef, restaurant owner, and innovator in the City of Boston. After 15 years of experience working in some of the top Boston restaurants under award-winning chefs, Louis opened Tavern Road in Boston’s Fort Point neighborhood in 2013.  In 2003, Louis founded Boston’s first ever underground and interactive dining experience, known as “Chef Louie Nights.” After years of successful events, Louis later launched a second project called CREATE, a large-scale food and arts festival with a mission to bridge the gap between visual and culinary arts in the city of Boston. CREATE is now in its seventh year.
​
On his rare days off, you can find Louis taking day-trips to local culinary destinations, kicking around with his band of chef buddies, exploring local art, and rooting for the Celtics, Sox, Pats, and Bruins. Louis has been a supporter of Lovin’ Spoonfuls since 2010.
What compelled you to get involved with Lovin’ Spoonfuls?
I fell in with LS around the same time our scooter gang was tearing up the bike lanes of Boston. Ashley Stanley was introduced to me through a host of mutual friends and we suckered her into playing with us at Chef Louie Night. I participated in the first Tailgate, she bought a farm animal costume, and the rest was history.
What resonates with you about the LS mission?
Aside from becoming close friends with Ashley and the team at LS, there are a million other reasons I find myself in the middle of everything they’re doing. I have my hands on food most of the time I’m awake, so their mission is very important to me. Posting food porn and racking up Instagram likes is neat, but feeding people is why I got this gig in the first place. There’s a lot of food getting wasted everywhere, everyday, by everybody. Simultaneously food is needed everywhere, everyday, by somebody. Lovin’ Spoonfuls is connecting the dots.
What’s your favorite food?
My favorite food is ice cream.
What’s your favorite way to use leftovers?
I use leftovers in pretty obvious ways. Thanksgiving becomes “the greatest sandwich ever made”, risotto turns to arancini, “lots of stuff soup” is a signature dish.
Best Lovin’ moment or experience so far?
My favorite Lovin’ moment definitely came this past year. I was able to contribute to the video presentations at Tailgate along with Will Gilson & Andrew Zimmern paying tribute to fellow scooter gang member Jaime Bissonnette.
Any projects in the works we need to know about, or anything you want folks to know?
As far as my future goes I’m going on a Boston Harbor Cruise this coming Sunday & the Refreshments are playing on it. So I have that going for me, which is nice.