From the Driver’s Seat: food insecurity right here at home 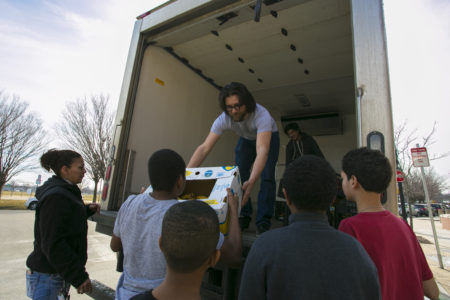 Every Monday, East End House in Cambridge receives a delivery from Lovin’ Spoonfuls for their emergency food pantry, just a couple blocks from where my sister and I would run amuck at my uncle’s dentist office as children. Every Tuesday, Salvation Army Mystic Valley counts on us to supplement their donation bags with fresh produce, right on the same stretch of road I would skateboard down as a mischievous middle-schooler. It’s right down the street from where I grew up — and where I currently live.

One of the benefits of being a floating Food Rescue Coordinator is getting to see the Greater Boston area every day with my co-workers. As a proud New Englander and self-described “townie,” I can’t help but look around as I drive along. I’m sure that drives my co-workers mad, as I remember places and events along the way. “That’s where my father would take me bowling,” I’m sure I’ve said to multiple eyerolls as we rumble past Boston Bowl on our way to Catholic Charities Dorchester. “That’s where I would play mini-golf every summer,” I’ve no doubt said to blank stares driving through Stoneham on our way to Metro North Children’s Learning Center.

It’s easy to forget that Lovin’ Spoonfuls goes beyond Boston (due to their presence in the city proper), but we service 38 cities and towns in Massachusetts. According to the U.S. Census Bureau, low income in our national suburbs grew by 65 percent between 2000 and 2014, more than twice the pace in cities. And, the number of people living in poverty in the suburbs surpassed the numbers of urban poor earlier in the 21st century. The number of families living in poverty in Essex County is nearly 19 percent, while Middlesex County is close to 13 percent. It is easier to see the effects of food insecurity in the city of Boston, but the numbers tell a simple story that is easy to forget: the reach of poverty and food insecurity is wide.

Growing up in a big Italian family in Everett, food was not a luxury, it was a habit. Every activity had to be accompanied by food, and every meal had to feed a small army (and you should feel loathsome towards your existence for the amount of food consumed).

It took me until middle school to really see what food insecurity was doing to my neighborhood. I knew my friends were poor, but I never viewed food as something that wasn’t a normal occurrence until I  dragged along one of my friends to dinner at my grandparents’ home. The copious amounts of chicken cutlets, mashed potatoes, fresh fruit, green salad, gnocchi, green beans, and other superfluous edibles spilled over the table, and I yawned, but my friend hemmed and hawed. It was a sight he had never bore witness to, and his gums for certain would not cease flapping letting me know. For days he talked about it, letting me know that his family just didn’t eat that way, that he was lucky to get meat some days, that he sometimes only had his free school breakfast and lunch other days.

I never forgot that, and I always invited my friend back for dinner when I had the opportunity. I was young at the time, but it felt good inviting someone in to share.

That’s how I feel now, too. As I visit all the neighborhoods I’ve grown up in for Lovin’ Spoonfuls, I feel like I am inviting people in to share with us. I may not know each person we are feeding personally this time, but they are part of my community, the Boston community, and the global community. There’s plenty for everyone.